53. The Entire Journey Starts With The First Step!

Can a beginner really be allowed to play exercises with stiff, spread-out fingers out of tempo? Of course! More than that, this is exactly how he should play. After all, he simply can’t do it any other way!

Once, a music professor visited my studio. Seeing a recording of my three-year-old student playing Hannon, he was very unimpressed. “The boy is playing with improper hand placement!”

“But he’s only three years old!” I countered. “His coordination is only starting to develop!”

“He should play with rounded hands, or not at all!” he cut in.

Then, I showed him a video of some of my older students. “And how is the hand placement of these students?” I asked him.

“See. There you go! That is how it needs to be done. I’ve said it before and I’ll say it again: you shouldn’t start that early!” He didn’t know that these kids, playing with free and rounded hands, jarred professors in just the same way a few years ago, groping along the keys with ‘improper’ fingers.

Why should we talk to the beginners about rounded hands? Their adventures along the keys aren’t much different from their first steps, made with small, bent legs to meet their mothers. Of course his fingers stick out in random directions, and in order to press the key with his pinky finger, he’s got to move his entire hand. The sense of the keys will come to him only when he develops his coordination. When properly worked out, the hand will easily assume a natural, rounded position. And there isn’t any kind of tension! When you know where you’re going, then the going gets easy!

The problem of ‘improper hand placement’ simply doesn’t exist. We thought it up ourselves. Comparing which students’ hands are the best, we are only satiating our own self-love. But the problem of cramped hands is absolutely real – though the kids don’t have anything to do with it. We’re the ones that cramp them, or rather cripple them, trying to force proper hand placement on them before we’ve taught them anything at all.

The most important support for coordination of the technique of playing is familiarization of the entire space of the piano. It isn’t learning the weight of his hand, but exercising over all of the keys that helps the beginner to gain confidence in his hands. Think for yourselves: where do you feel most confident, in a place where you know every corner, or in a place where nothing is familiar?

After learning to “freely run along the keys,” a child will want to do something new. Then comes the time to learn some other ‘tricks.’ The student will look upon them with happiness and delight. Now, he’ll be able to:

-learn to play rhythmically with the help of a metronome

-learn to play more loudly and more quietly, with the flow (legato) and in jumps (staccato)

-learn to play on the piano without stickers. 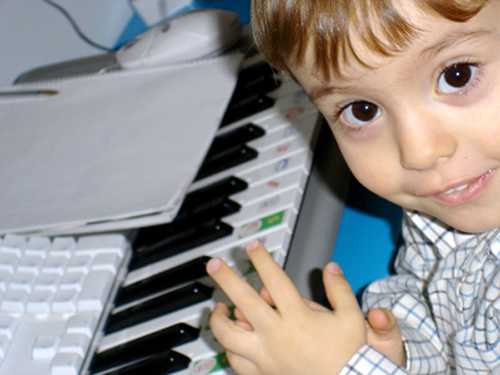 And as for stickers .. As has been explained, their role to the visual perception of a child is simply priceless. Visual information on the keys is the most important support for the development of the technique of coordination.