Letters from the Kingdom of Tune. #18 Princess Subdominant: Music is in great danger. We are all in danger.

Princess Subdominant is writing to you. 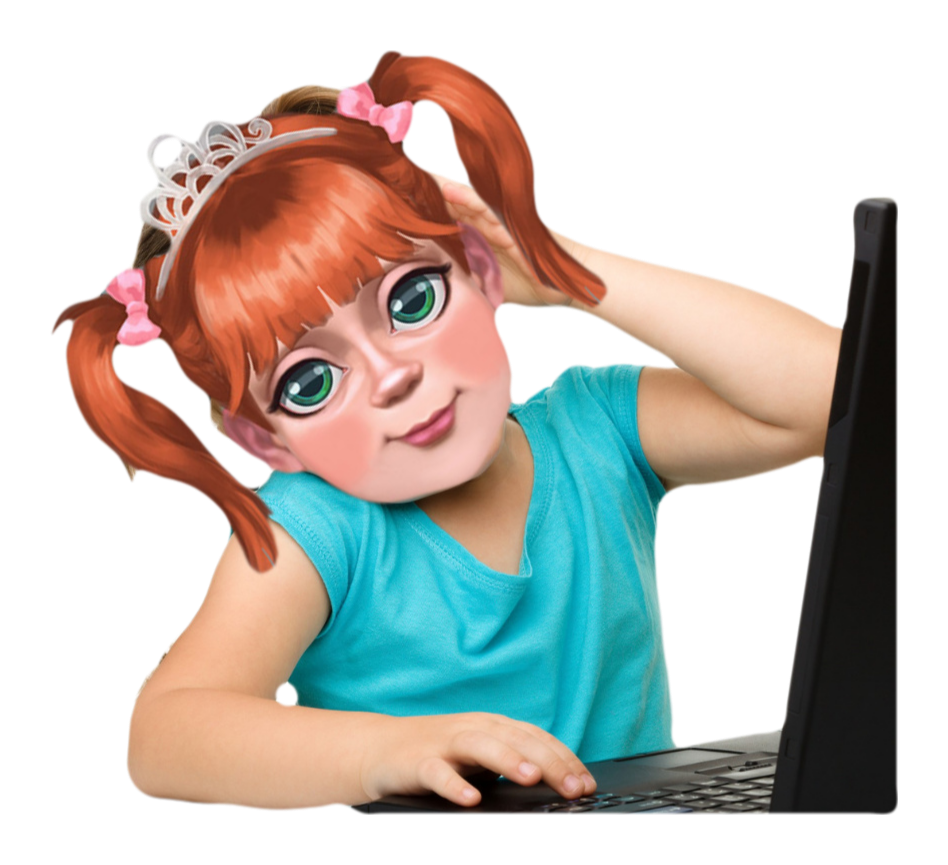 Every day we have adventures in the Kingdom of Tune. And how are you? Do you like making music with us?

Just bear with us: we'll find my brief case -- and everyone will feel better.

Today, at last, on Skype we saw the meeting of the Guard and the Royal Mouse.

It was very exciting!

Look: I took a picture of the screen especially for you right from this event: 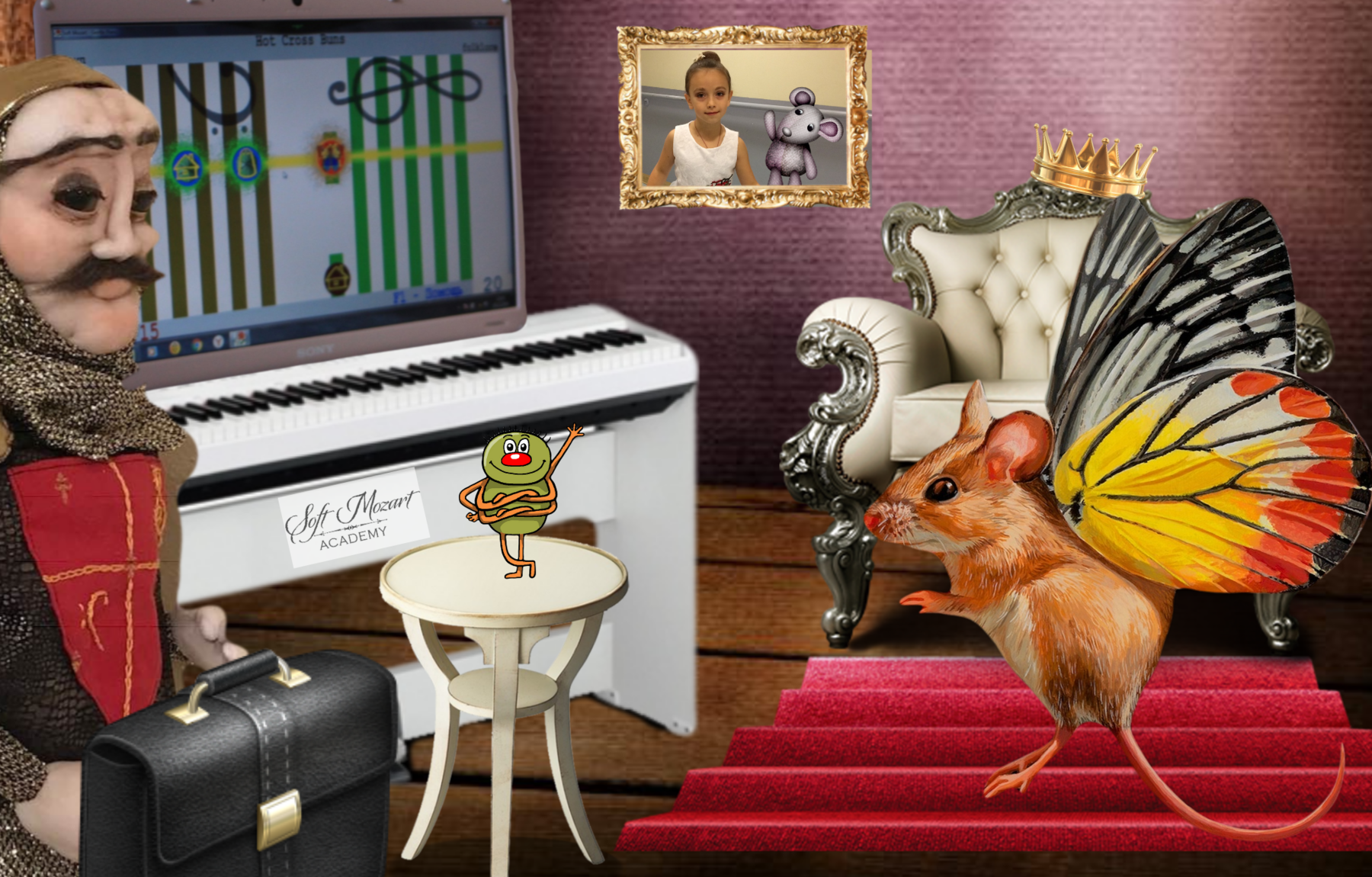 Once again, we all saw green and brown stripes on the computer screen, just like at the ball when the boy Akim played for everyone.

The Guard brought an empty briefcase to the meeting. At first, he was very upset and even angry. He was ready to fight for the missing notes with the King of Mice. He was sure that it was Mouse who had stolen them and did not want to give them away.

It's good that now we have Internet and were able to connect on time. This diplomacy saved the peace between our states.

When Uncle Tuning Fork peered into the screen, he suddenly exclaimed.
“Long time no see?!”

It turned out that he and Mouse King are old friends.

This surprised the Guard very much, who exchanged anger for mercy. He stopped shouting and threatening to fight Mouse King.

“This is the patron saint of our family. He also helped my grandfather get books from the Great Guido of Arezzo. Thanks to these books, the Kingdom of Tune was built," said Uncle Tone. There is a story about this in the book -- the "Kingdom of Tune 2"!

Oh, then we were all so delighted!

Here: they took a selfie specially for the occasion: 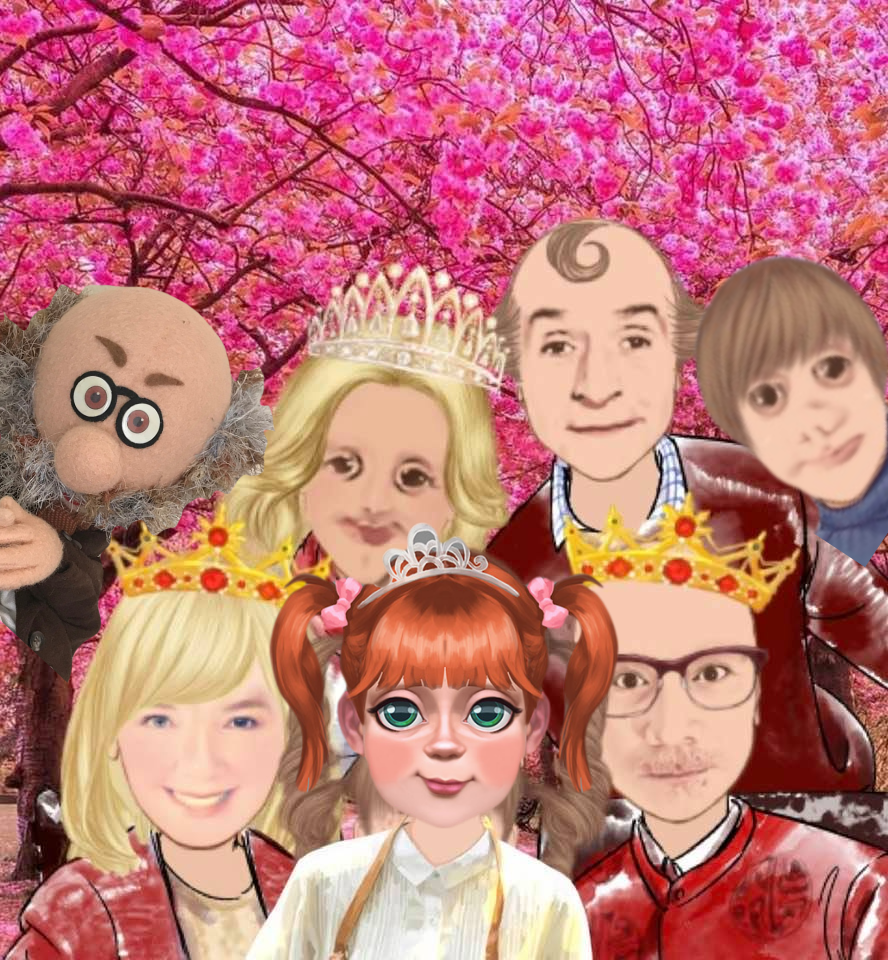 If Mouse King is our ally, then he is with us and for us; he is our friend/ right?

Therefore, everyone decided that soon this story would have a happy ending: after all, the escaped little mice said that he should have all the music notes.

I asked him directly about it. And then Mouse King suddenly became very sad and began to cry. He took off his wings and crown and laid them on the floor. In an instant, the mighty Mouse King turned into a little old mouse who could hardly pronounce words and sobbed endlessly.

“Unfortunately, there is no way I can return the sheet music to the Princess. The music notes are broken." We all heard these words but could not believe our ears. 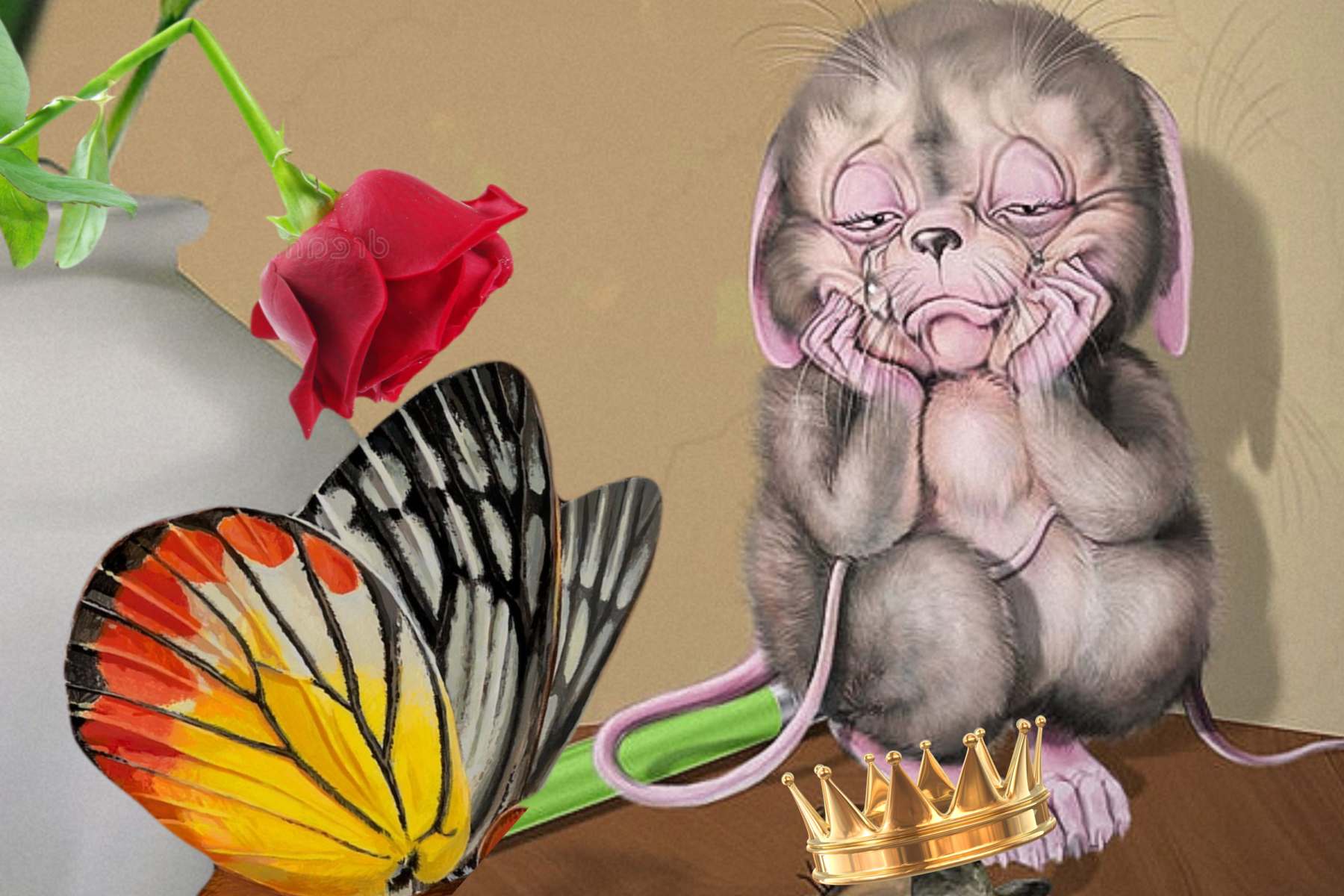 "What do you mean the notes are broken?" exclaimed the Guard at the other end of SKYPE and for some reason grabbed the sword again.

“Flower stems dry out without water and break! This is what happened?" I asked.

"How could this happen? Whose fault is it?" my dad asked.

"What do the flowers have to do with music notation?" the Courier joined our quest.

“Once you put a flower in a vase and forgot to pour water. The flower wilted and dried up. We were all upset that day . . . "- my mom answered.

"Just recall what it looked like!" Maid of Honor echoed.

This conversation resulted in the following chords: 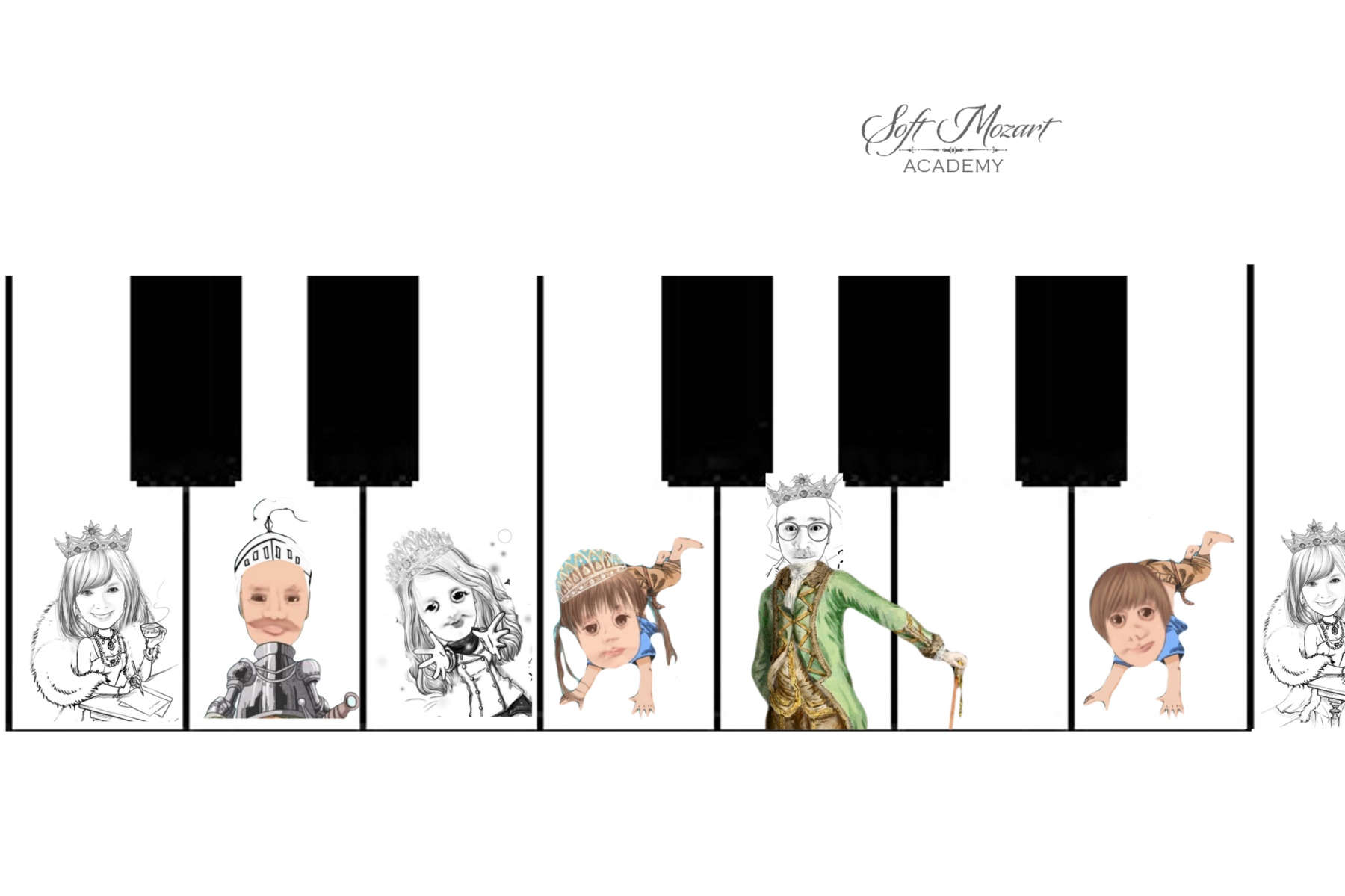 Try to play all the keys with the color pictures first, and then all with black and white.

How was it? Did you manage? Do not be confused that my dad participates in chords twice. I deliberately made his portrait half color and half black and white.

However, Queen Tonic's answer to Dad led to a new question. 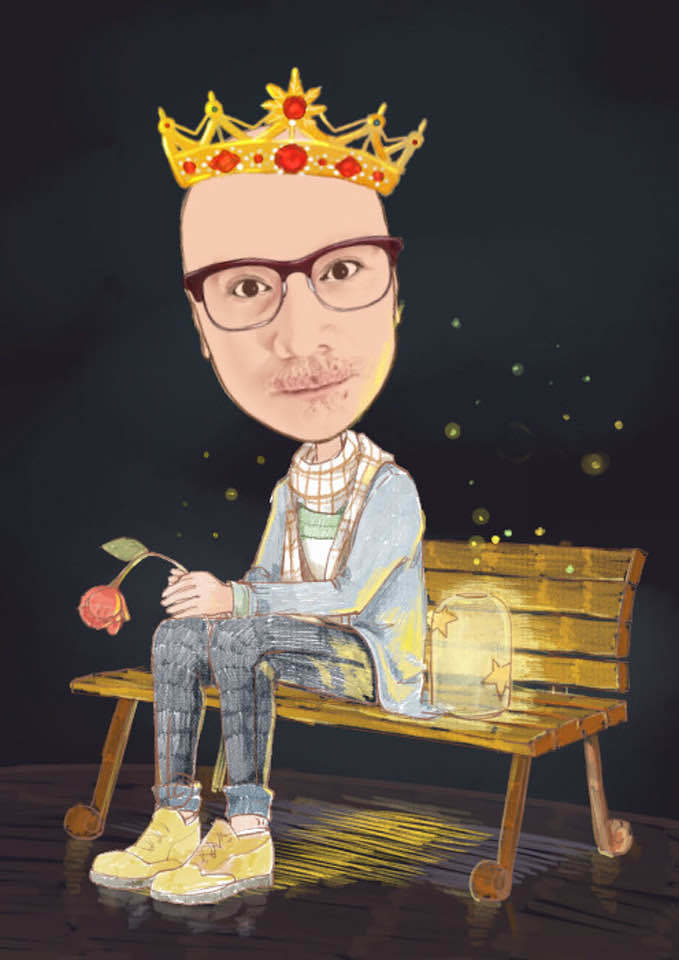 "How could I have forgotten to pour water into the vase?" King Dominant exclaimed.

"Maybe because we broke the water pipe then?" asked our restless "Triton" -- my friend Courier and I at the same time.

“So you then left the whole palace without water? And we thought that the pipe had been gnawed by mice!"  the Guard said and looked guiltily at the King of Mice. Did the flower even survive?" he asked Mom.

"One of two things: either survived or not . . ." Uncle Whatif replied carelessly without waiting for an answer from Mom -- Queen Tonik.

However, my mom and Maid of Honor for some reason were glad that Whatif had turned the conversation into a joke. They always supported him when they got tired of Daddy’s questions or wanted to turn the conversation to another topic.

This behavior of my relatives in music is called "interrupted cadence."

Do you want to try playing the interrupted cadence? The rules of the game are the same: play color portraits first, then black and white:

How was it? Did you have fun playing the chords?

Do you understand the difference between the Dominant – Tonic cadence and the Dominant -- VI degree (Uncle Whatif) cadence now?

But back to our notes, which, according to Mouse, turned out to be broken . . . 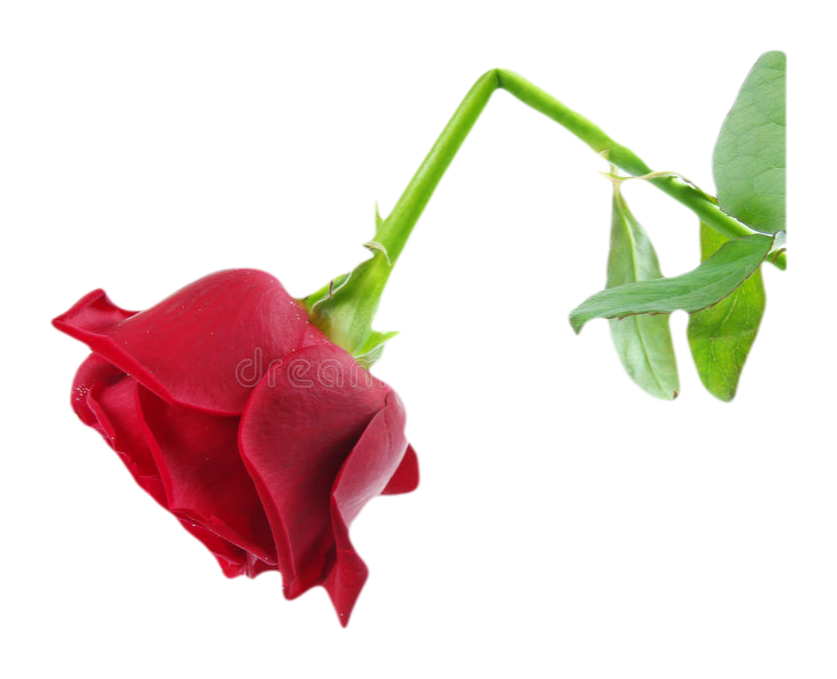 "Who broke the notes without my highest command?" sternly asked my dad, King Dominant.

“I'm trying to figure it out,” the Mouse said. "Uncle Tuning Fork, do you have a photo from that memorable day when I brought you books from Guido of Arezzo?"

"Oh sure! Only this is not a photo, but a painting by an artist,” Mr. Tuning Fork said.

"Send the image to me right now, please," asked the Mouse. His tail trembled with impatience.

No sooner had we sent the picture than we received it back. There was a red mark on the left of the picture. There it is: 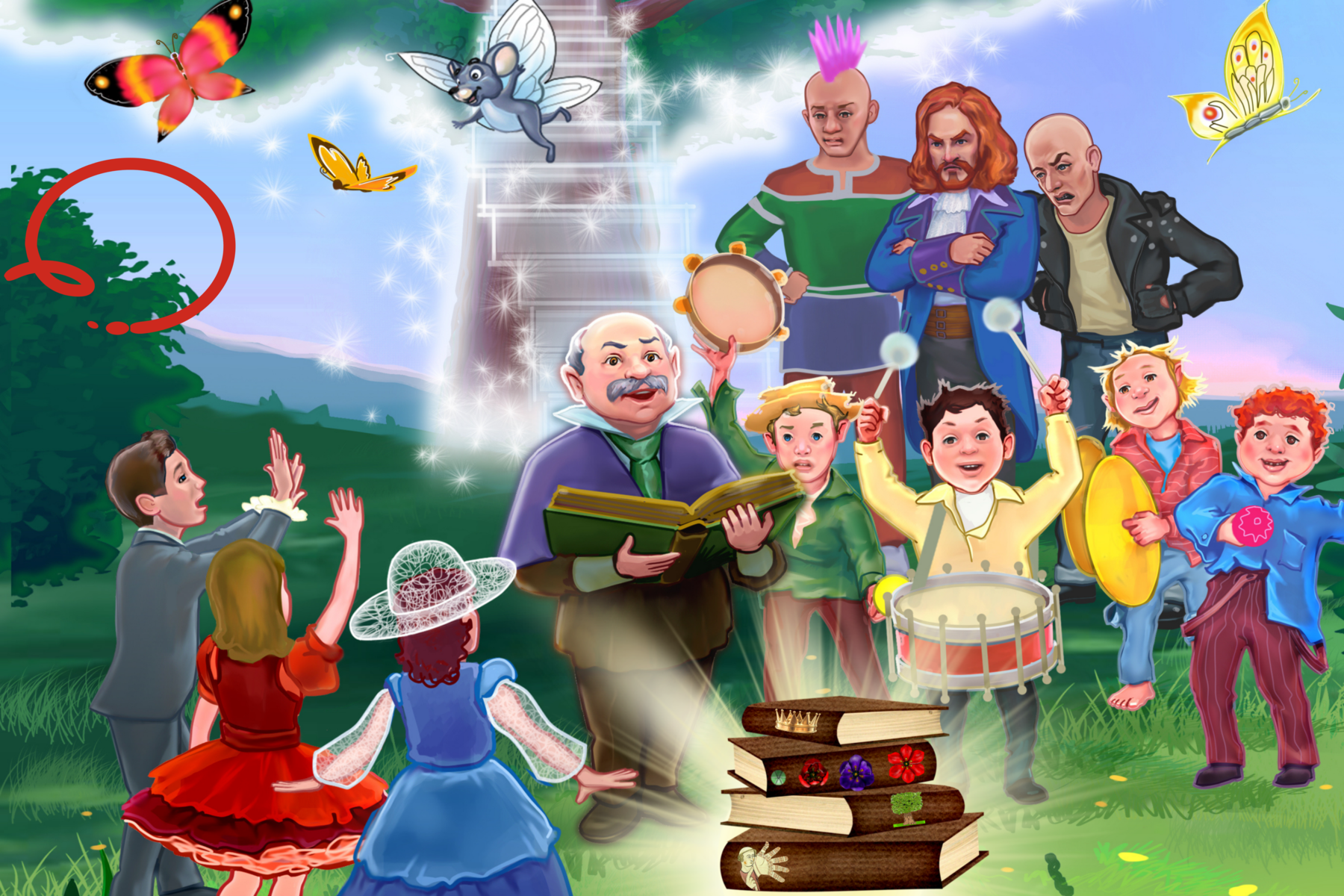 "What's wrong with that?" King Dominant wondered. But before our eyes, this picture began to change.

Right at the place marked in red, an object suddenly appeared, resembling someone's head in a hat with a feather.

"We need to enlarge the picture," said the mouse anxiously.

Even the careless uncle Whatif stopped smiling and sat down closer to the monitor screen. And Tuning Fork, having cleaned his glasses with a snow-white handkerchief, could not take his eyes off the screen at all. 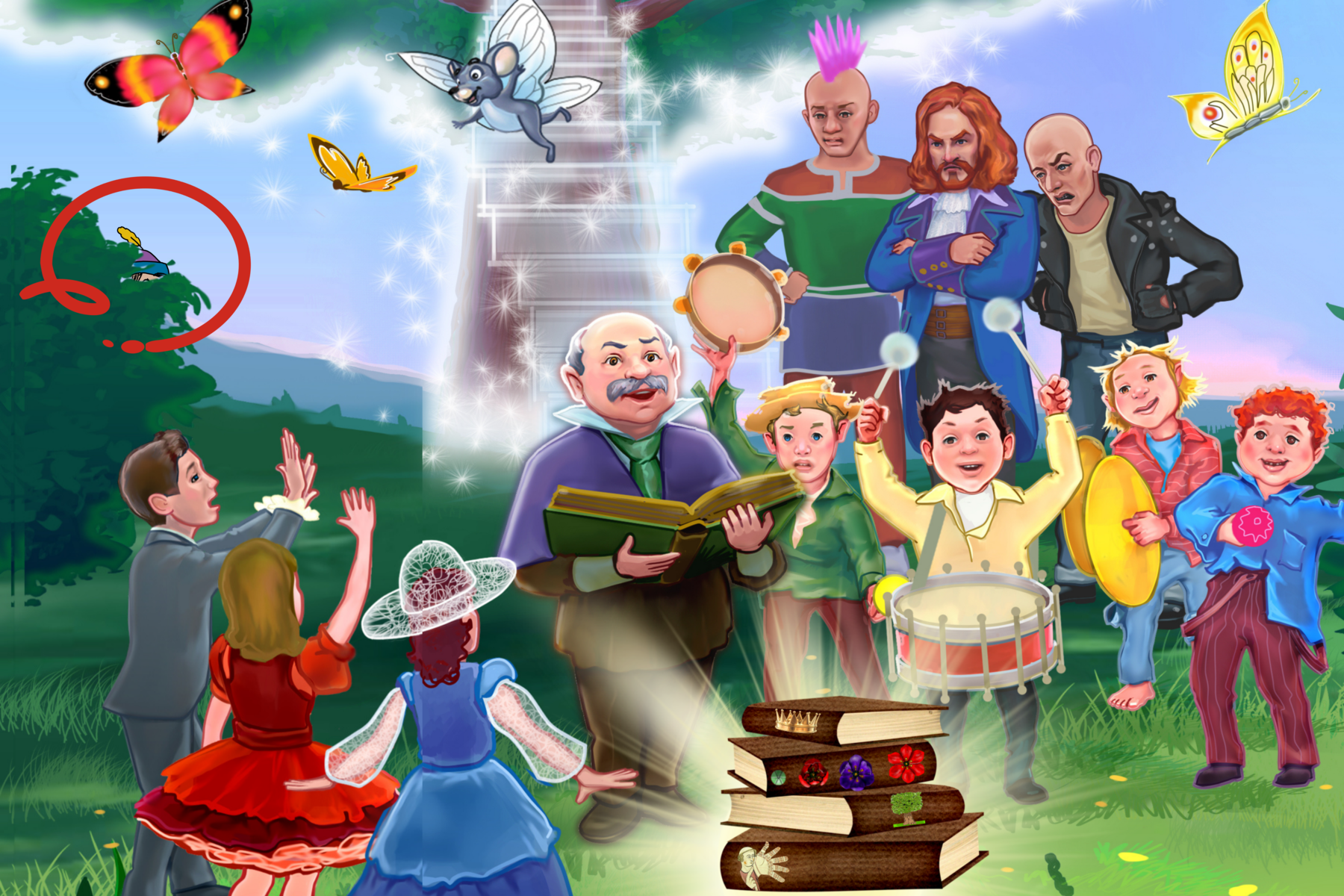 Mouse King continued to zoom in on the image. And suddenly, in the bushes, everyone saw the head of a creature in a hat: 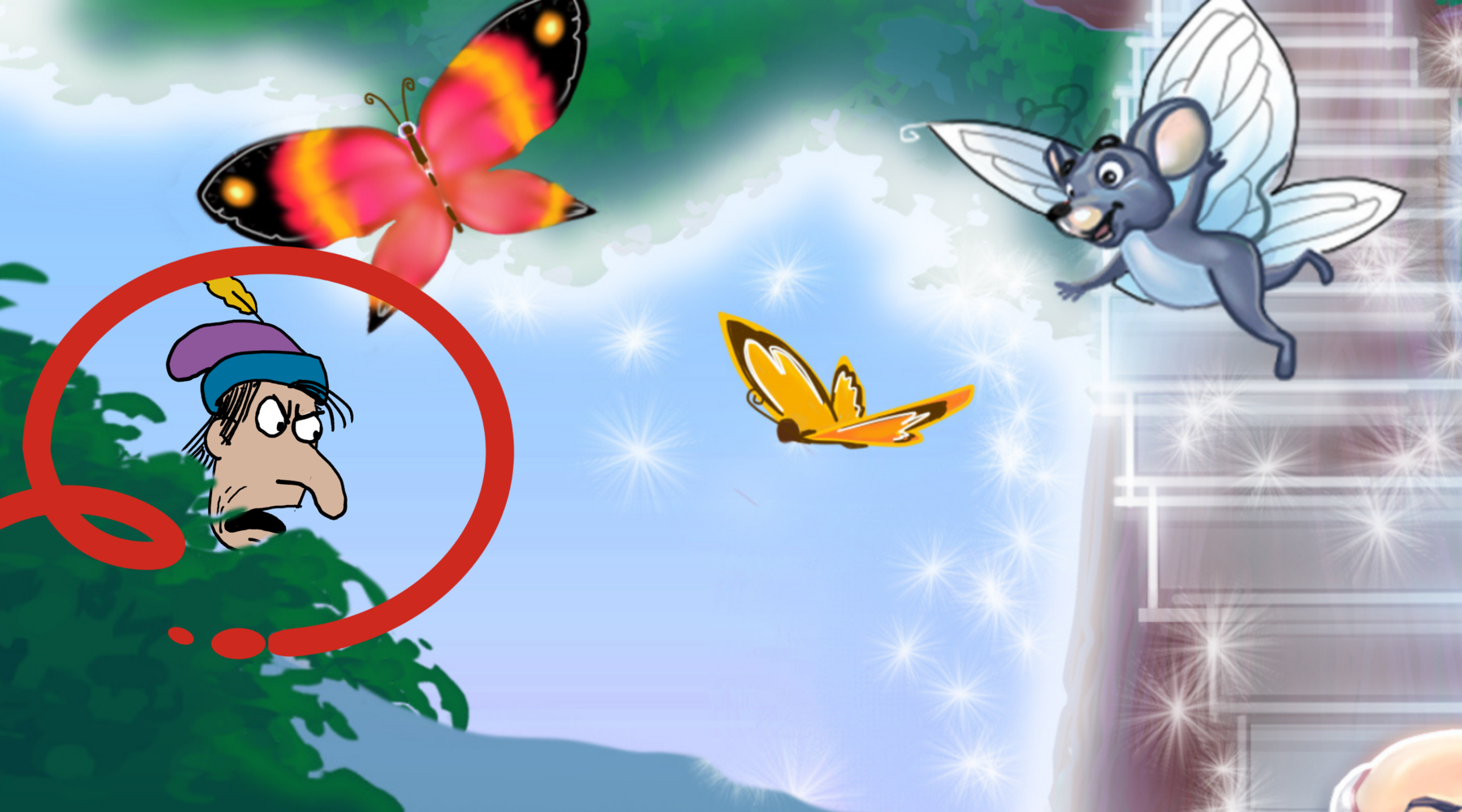 "This face is familiar to me!" We heard the excited voice of the mouse. "How could I not have guessed right away?"

He enlarged the picture to the maximum and showed us what could only be seen from the sky: from the screen, the face of some evil creature was looking at us, tearing sheets of paper with notes and trampling flowers around. We were all literally dumbfounded by surprise and fear: 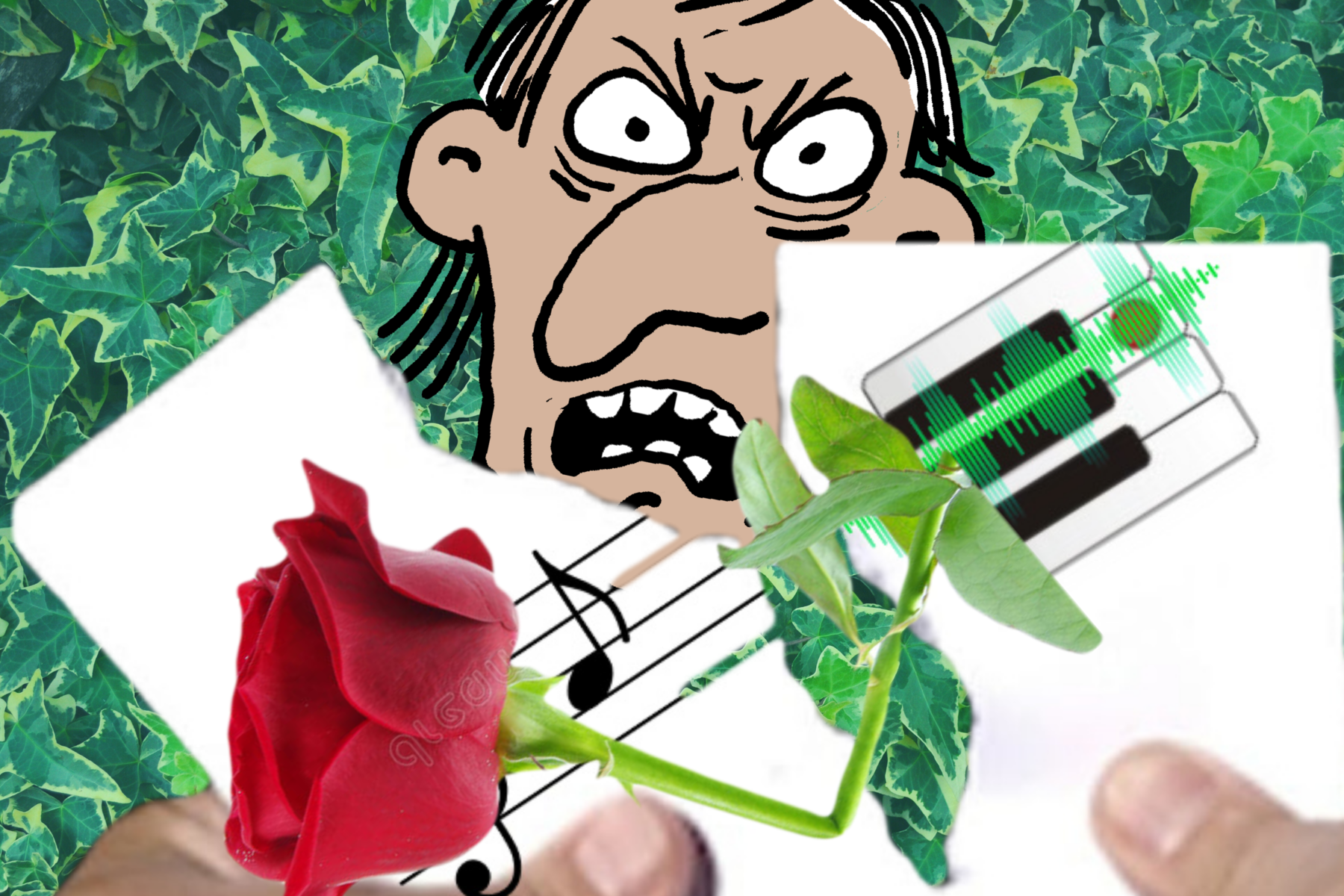 My dear addressee, it's time for me to run. There is an emergency meeting in the Kingdom of Tune in connection with this event.

It turns out that everything is much worse than we thought. Music is in great danger. We are all in danger.

However, don't give up. Keep playing exercises and getting ready for academic recitals. Be sure to repeat the chords I gave you today. Okay?

We will definitely write to you what happened next.

Your friend, Princess Subdominant, and all the inhabitants of the Kingdom of Tune


Do you know that we have a room for you in our Kingdom? Come and claim it! Choose your school year and click New Topic. It will be your place!

Here is the link!