Time flies! It is hard to believe that you just started the lessons with your child more then 9 months ago! How was your experience so far? Did you learn a lot?

Share your opinion about my school with other parents. Let them know about it! Our facebook page is here and ready for your review!

In our Pedagogy Class today we are going to talk about importance of marking the keys for your toddler:

If you don’t want to bump into something, don’t walk around in the dark.

When I only just started learning, I found a treasure: a small knick on one of the keys of my piano. Thank you, whoever it was that put it there! It served me as a loyal and honest hint for several years, before I completely memorized the keys of the piano. The knick was very close to Do; it was on Re! When learning new pieces, I looked to it like a ship’s captain looks for a lighthouse. Even now, I think of this tiny little scratch with appreciation and fondness. It saved me like a life vest saves a man overboard!

Because of this, I made some stickers that can be applied to every key. This is like a map of the entire space. It gives a beginner all of the information he needs. On each key, I placed its name, whether it is on a line or space (depending on its color), and in confluence with sheet music, I added the lines of the treble (green) and bass (brown) clefs. The keys, the grand staff, and the keyboard’s sound are united by stickers into a single entity. The kids are spared from many hours of impractical mental work, and the attention has been focused onto coordination and the reading of notes.

When I did this, I received many letters with questions from my colleagues: won’t this damage the student’s ability to think independently? And I’ve always wanted to ask: tell me, what does the student come to you for? To learn to play, or to learn to think?

When you have to drive to a different city and don’t know the way, you take a map with you, or print out directions. And you will continue to check them until you learn the route. Imagine that you’ve gone to the store to buy a map, but the clerk won’t sell it to you! “Don’t take the map, you won’t ever learn to think independently and solve your problems that way! You’ll never be able to develop a biological compass!” How would you respond to that?

The natural desire of your child is to get to the end of the journey rather than get stuck somewhere in the middle. Why is it that in music education, we’re supposed to sit in one place and think long and hard instead of freely exploring the keys and gaining pleasure from it?

Many educators are convinced that when he gets a hint, a person will spend the rest of his life relying on it. They don’t understand how a person’s perception works when he is learning. It has two habits. First, new information is only taken in when it is needed. In order to understand anything, a person must be able to have an applicable use for the new information. Second, having understood something, the perception widens at once. It doesn’t stay in one place! Receiving a hint and feeling secure, the perception starts to take in everything around it, traveling farther and farther from its safe spot.

Think of your first day at a new job. Did you go home with a crystal-clear memory of the room you were in, the color of the walls, and the names of all of your co-workers? More likely, all of this information was assembled after you became more comfortable in your environment, and gained the confidence that you were doing your new work properly.

Within each of us lives an explorer! But what is most important for any explorer is his ‘home,’ a place that he can always return to so that he doesn’t get lost. And the wider our world becomes, the wider the safe zone is. This way, after starting in a ‘cottage’ of a few counting fingers, we move into the ‘house’ of the table of multiplication, and later we can even build ourselves a ‘palace’ of integrals.

I often witness these ‘house warming parties.’ Coming in for a weekly lesson, a toddler proudly announces, “I don’t play with stickers anymore!” And just try to force him to do it! To him, that is a personal insult. Learning and mastering a certain level, the perception gets bored and starts to push it away, like an older child does a lullaby that he’s outgrown. In my studio, there is always an instrument without stickers, but with a small guide behind the keys that displays that same ‘map.’ After a little while, kids that sit down at the piano ceremoniously take it off. At that point, it even distracts them!

I am convinced that the use of guiding stickers isn’t simply humane to our students. It is also an act of respect of their inexperience. Giving a beginner guides and warning him of his hardships, we display a huge amount of loyalty to his perception. We shouldn’t punish the child for the fact that he is a child. We shouldn’t torture him like cruel jailers, giving him a problem and watching how he’ll save himself from it. We should give him a helping hand, like friends: lean on me, while you need to. I trust you, and you’ll definitely get better. And the perception, feeling our help, starts to work with us. With every new achievement, the individual develops self-respect and trust in his own strength.

Keep working on your modules and exercises.

Learning to say Alphabet from couple of notes. Look how our student Titus is doing that: 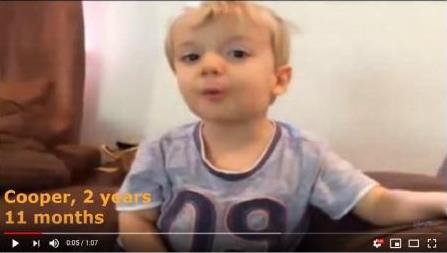 *Please, contact us for individual consultation on choosing your piano pieces for your child, if the listed Albums are too easy for him/her*

1. Keep practicing the excerpt from 'Hallelujah'  by Handel
2. Ask your child to play Right, Left or *optional* Both hands. Don't push!
3. Keep working on all of your favorite songs

Listen to 'Hallelujah'  by Handel catch of this week. Enjoy! 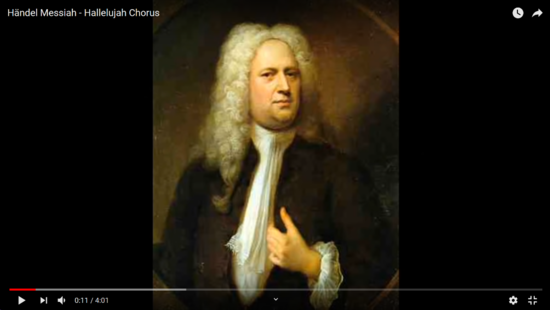