The importance of images in learning to build child's ability to focus on music. The ability to visually distinguish objects and color develops in the child after birth and is a new skill. The ability to focus only arises from use. Because of this your child may look in different directions and not focus on an object, until he becomes interested in it. Since vision prompts movement, your child will move around a room following their beautiful young eyes.

This is a perfectly normal reaction!

There are simple ordinary ways to attract the attention of the child and his development. Historically, they developed spontaneously. Bending over the cradle, we begin talking to the child, and he, in response to the tone of our voice, studies the features of our face. For very little tots, rattles are the most popular thing in a toy store. When attracting a baby's attention to the sound of toys, we are helping his vision to focus on it. When moving a toy, we are training the baby's eyes to follow the action. So, with the help of an already established and working channel of perception (hearing), we shift the child's attention to develop another ability(to focus).

According to this principle, the child develops, combining different channels of information into one and bringing together billions of neurons in 'paths,' 'tracks, 'corridors' and 'junctions.' The new skills of the child are—'the paths' that branch off from already existing roads. It is very important for any parent to know and understand the strengths of the child, his fundamental 'highways.' This is not as difficult as it seems!

Our use of pictures in learning music sounds and developing voice are very important in your child's development! From speech—to a picture

Speech memory (or Echoic Memory) is one of the most developed skills in a child. Children learn to imitate the intonation of adults from birth, because their hearing is already developing while they are in the womb of their mother. Many videos exist, where two month old children already imitate the intonation of their parents and even sometimes can exactly repeat a few words after them.

The pictures of a Door, Rain, Mirror etc, can get the attention of a child, when they are accompanied by both by the word and the action and the musical sound. This is exactly why you should use the following order in teaching your child music:

From the pictures we go to the keys and the notes.

Practice your cards with the song!

Next step is: Visual development–motor coordination

When we have the keys and the notes, the picture becomes a 'guide' to the development of hand-eye coordination. The child learns to match the pictures and with their help, quite quickly transfers his focus to the keys and to the screen with music notes.

The visual motivation prompts the child to press down the key, not only for the sound, but 'the familiar' key, the name of which is known and spoken. The eyes find the same picture in the musical notes.

It often happens that it is difficult for a child to focus on the picture, the note, the key, even with our program, because there is too much visual information before his eyes. So he begins to literally get lost on the keyboard, and is unable to select one key from all the others.

In this case as I suggested before we should temporarily cover 'the interfering' part of the screen and/or the keyboard, so as to be able to help him concentrate primarily on the motor skills. 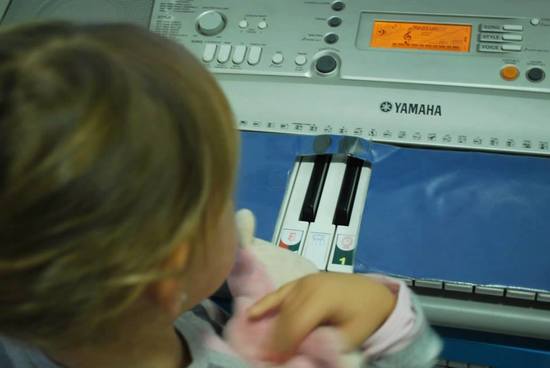 Pressing down the key brings the animation up on the screen. So gradually the child begins to develop his hand-eye coordination. He matches the pictures, presses down the key and see the results of the action on the screen. This is exactly how he starts building complex skill of reading music and playing piano simultaneously.

As a child's most developed and independent finger is the index finger, he is most likely to start pressing down the keys with that finger. You don't have to persuade him to do this. It doesn't even matter if he wants to play the notes with his nose: he needs to learn to look at the notes and find the corresponding keys without wondering around. He is not yet ready for new dilemmas.

Gradually memorizing the sequence of the pictures, helps your child to perceive the visual information and manage his own fingers, not separately, but together. This really helps him to learn the location of the notes and the keys and also to understand how better to use his fingers together.

We continue to work on playing the Chromatic scale in an upward and downward movement in parallel with two hands: we try to play smoothly, without stopping:

Keep working on cards from Ti.

Repeat all the previous rows.

3. Listen to the last - 8th -track of the Alphabet Song - Chant and learning to say all tracks from all the notes fast, in rap style.

You can download the entire song by clicking on the picture below:

1. Master the performance of "Jingle Bells" with the TEACHING VIDEOS.

Video with a metronome. Play R, L and P:

Video with no metronome:

1. Listen to one of our students playing the "Russian Dance"