Last week we learned with you what pictures have 'nutritional value' in learning - which do not. I am going to develop this topic a little more: now in our Pedagogy Class we are going to learn
What Should Be Coded by Color in Music?

There are many methods that use different colors for different keys. What should we know about them? If we use colors or images, they should act as guides that can direct the viewer’s attention while viewing normal music notation. The graphics of the music staff and its auxiliary form should add to each another, not battle for primacy. Once upon a time a colleague in Ukraine helped me to understand this best.

After one of our 'open lesson' she proudly announced that she’d been teaching children with a “colorful perception of music” too. Her students write down music dictations with colored pencils. Each of the seven notes is assigned a separate color, and it must be marked down with the right pencil. During the dictation, the kids not only have to understand which note is being played, but also remember which color it has been assigned.

My goodness! When I tried to imagine what was happening in the students’ minds during such “innovative” dictations, it made my head spin. Color and sound aren’t at all related in our perception because color is perceived through vision, and sound through hearing. I’ve read many scientific articles about the subconscious perception of sound in relation to a color spectrum, but nowhere has it been written that separate colors can logically be fastened to certain notes. These ties simply don’t exist. Of course, we know of several composers that were born with a “music-chromatic perception,” such as Skryabin and Rimsky-Korsakov. But their color associations mostly didn’t coincide.

Hearing and the voice are responsible for the separation of sounds by pitch. Audio-chromatic associations are different for every person. They can even change depending on one’s mood! Because of this, color can’t be used as a focal point in the understanding of sound at all. Trying to rely on such a foundation will bring the perception to a dead end. No matter how hard the perception tries, it can’t tie one to the other.

Still, one often comes across attempts to coordinate each step of the music scale with its color, and to tie it to the keys and the music staff. But this barely helps the effectiveness of a lesson. First of all, under the laws of perception, a person can handle no more than 2-3 different colors (objects) at the same time. Memorization of seven different colors connected to their notes, in essence, is an entirely new and abstract language. Instead of aiding the student, this becomes a heavy and unnecessary burden for his memory. Secondly, as has already been explained, sound and color aren’t at all associated in a person’s perception. It’s like trying to teach Finnish by translating into Turkish.

1. Be sure to repeat exercises.

First, let's learn to march with your fingers on a table and say along: 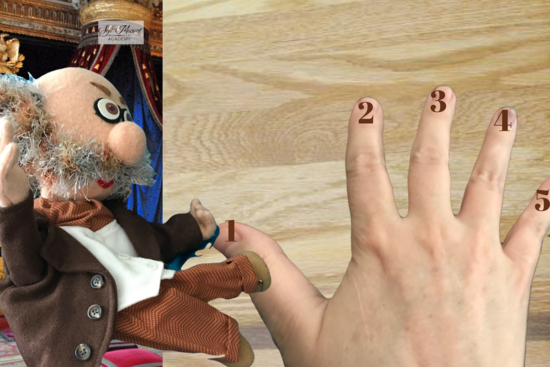 And now you need to put your thumb on the key DO
Like this:

Then press the RE key with the pointer, and the MI with your third finger.

And now we need to press the FA key, BUT! With your thumb again. For that you need to practice raising your wrist on the third finger, slightly turning the thumb to the next key - like this:

After that straighten your hand and follow 2-3-4 with your second, third and third finger.

Here is Hellene Hiner's video instruction how to play the exercise: Cut all the remaining Level 1 cards.

Practice knowing where the notes are on lines (girls) and between them (boys). Check the answer on the back of the card.

This module teaches timing and rhythm and how to recognize the different time value for each note symbol, how long to play each different type of note.

Press the Space key to play a note on the yellow line. Release it when the note is over a basket with the same symbol. The time the Space key is held for different notes depends on the time value symbol of these notes. You must complete 21 different songs to finish the module.

Play a new note immediately after it is on the yellow line. If you play quickly and correctly, you will hear the melody of a song.

The module directly builds the eye-hand coordination needed to differentiate notes by time value. The player plays melodies from an actual music score, but using only one key. This enables the learner to concentrate on learning the time value for each note symbol. An advanced student can finish the module in 14 minutes (13 minutes of module time), but beginners should start by playing for a shorter time.

We recommend to play this module for 5-10 minutes

1. Continue to memorize "Hickory Dickory Dock":  try to play the piece with separate and both hands and make the minimum number of mistakes with the minimum time lag.