Today in our Pedagogy class is important information about the

Please, remember: One Minute Is a Long Time For Your Toddler.

If you say to an adult: 'Just a minute!'–for them, its just like a instant in time. A minute for a child–is forever. We perceive time in proportion to how long we have lived. The longer we have lived, the shorter one minute is in our perception.

The 'nutritional value' of one minute for a child and an adult is also different: a child absorbs information by means of all his sensory organs and afterwards his whole nervous system and intellectual processes build on this foundation. Usually, adults, use a minute to attempt to logically make sense of information or remember it.

Therefore the results of teaching children and adults are different.

The impact of each minute that a child actively spends at the piano cannot be overestimated.

For toddlers it is necessary to create an environment with the help of the Soft Mozart program for music lessons to become, not an individual lesson once a week, but daily practice.

Ideally, the whole family should take part in the musical development of the tiny tot, learning different pieces and sharing in their success at family celebrations and academic concerts.

With the Soft Mozart program, it is absolutely necessary to participate in Academic concerts. There, the little ones are able to see how other young ones perform and understand that everyone likes studying music and playing the piano!

How is your teaching your toddler experience? Let me share my little story with you: 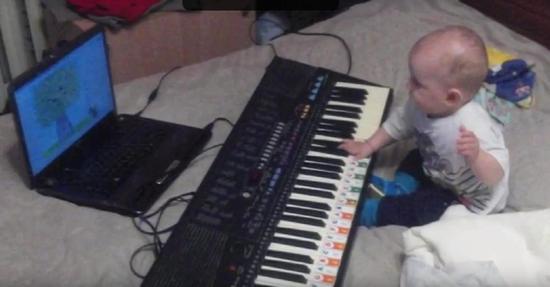 A picture from a Soft Mozart parent

After I arrived in USA in 1993, I unexpectedly received a unique opportunity to teach very young pre-school children in their natural environment, at a Montessori school. I was looking after them, even changing their diapers. At that stage I could only dream about a career as a music teacher, as I needed to learn English. My poor knowledge of English turned out to be my lucky ticket in making progress with my research. I decided that learning English from two year old children was the way to go. I have never doubted that the choice I made was the right one.

We found ourselves helping each other. The little ones helped me to put English words into simple sentences. I helped them learn basic skills for playing piano. I can't say I achieved perfection in expressing my thoughts in English, however, overall the way we assisted each other was extremely productive.

Before I was immersed in this world of toddlers, I thought that I knew everything about them, as my daughter, at that time, was already eight years old, and I had survived her going through the 'terrible' twos. It seems to me that it was just yesterday when she had been two, and that I knew everything, having already been there, done that. But when I became a part of that bunch of preschoolers, I understood that I had hardly learned anything in the past about the capabilities of children of that age. As it turned out, I had not really experienced that phase of my child's development, I had just skimmed the surface and missed out on the most important things, and now conceitedly and over confidently I considered myself to be an expert.

I want you to avoid my mistake!

To be honest I was blown away, you could have knocked me down with a feather, when I came to fully understood this stage of children's development. On the surface it seemed like these were ordinary kids, running, jumping and going down slides. However, when I got really to know them, when I became an 'insider,' was learning English with them, I realised there was a lot more to them than meets the eye: at the speed of light, little 'Einsteins' were developing. They had an unquenchable thirst to learn new things, to exercise their brains and to improve their own intellectual development.

Something that really amazed me was the fact that the driving force behind the development of the attention span of children of this age is their own hands, especially their fingers. I remember being transfixed by them, when we sang The Spider Song[Its Bitsy spider], which includes finger play(Russian speaking people may know this as 'Soroka-Soroka').

Those youngsters, while playing, could, get totally absorbed in watching their own fingers or when trying diligently to put a plastic ring on a rod or when rotating small objects in their hands. The toys they liked the best were the ones where they had to press buttons or levers to produce different sounds.

So when the kids saw how they could use their fingers to make noises, they would fall into a state that is uncharacteristic for their age. Making sounds using their fingers, had a magical affect on them, it turned them into little focused investigators.

It was then that I had the idea to try to teach these little ones to play on a keyboard instrument, so I brought a synthesizer to the class. I thought, as they already really liked pushing different buttons, why not try and replace the buttons with the keys of the piano? If they like playing games using their fingers so much, why not teach them to play exercises and scales?

I can't say, that the first child who volunteered to became my student, immediately sat down and played Hanon's exercises for virtuoso pianists. Of course it was much harder than that and it required a lot of effort to get them to understand what I wanted from them and how to get my knowledge across to them.

However the results exceeded my wildest expectations! It turned out that by the time they are two, every healthy child already has the ability to control his fingers and can use all of them to play on a keyboard. When the child learns an exercise with one hand, the other hand can remember the sequence and also do the same thing, just repeating the movements of the first one.

The most amazing thing is that children of that age just love playing the synthesiser and as soon as they learn something, they want to show off what they can do to anyone.

Something that stands out in my mind is a story one of the mothers told me. She went to a music shop to buy a piano for her eldest child. While she was talking to the shop assistant, her younger child found a grand piano, and stretching out his hands, starting from left to right, like a hard-working man ploughing a field, started playing a chromatic scale, slowly moving his hands from the bass to the upper registers.

Amazed shoppers crowded around the young performer, but he did not let anyone distract him and continued till he had completed his task, concentrating on his goal. After reaching the last of the tremble keys, the child let out a big sigh and ignoring the applause of his admirers, ran to his mother.

Usually children who started playing on the synthesizer with my help, learned to control all of their fingers and use them properly. When we started to do this, the children acquired both musical skills and the ability to concentrate better. One did not develop without the other.

When I finally got things going properly, alternating our lessons with learning to sing notes, I could not help but notice how the children's speaking ability quickly improved. And besides that, many of the children learned to sing first and only after that began putting complex sentences together in their native language English.

It was only then that I understood more deeply the words of the philosopher Plato, that music should be the foundation for teaching children other sciences. I could see for myself: that great ancient scholar was absolutely right. A child's ability to make music with his own hands changes him radically: it transforms him into a thinker.

Does this means that playing a keyboard instrument is a vital element in every child's development, that will improve his intellect to a meaningfully higher level? This hypothesis made me think seriously. It means that a child's fingers wait for 'their time,' to become independent, accurate and capable. There is nothing better than keys, to make lead them in that direction.

I came to understand why many nations of the earth created 'finger games,' why pediatricians recommend that a child's fine motor skills be developed before they go to school. 'A child's mind is located on the ends of his fingers,' wrote the famous teacher V.A. Sukhomlinsky. However, even he could not have known to what extent that is true for two year old children.

I was also amazed that all children, that I had the opportunity to work with, could learn to play on a synthesiser, not just 'the especially gifted ones.' It was then that I started to think about the question, 'Why does the striving to develop fine motor skills become so important from the age of two, but not before?'

I did not receive a conclusive answer to that question until many years later, when new three dimensional, monitoring equipment was created that shed light on children's development while still in their mother's womb. It was found that the intellectual abilities of children before they go to school and the potential abilities of their fine motor skills have been seriously underestimated and need to be re-evaluated!

How is your progress on playing the excerpt from this wonderful masterpiece? I can't wait to see you playing it!

After learning the couple of bars of this beautiful piece, enjoy the orchestra/ballet sample of the music.

Here is what I found for you: 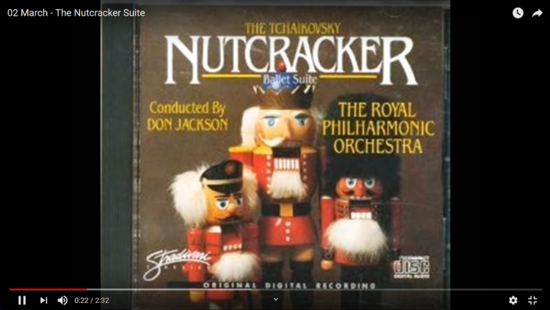 Keep working on all the piano pieces and exercises.

Keep working with the Guess Key Module. If your child is getting faster playing this module, suggest to sing each note solfeggio. Reward him with 'music money' for doing double work!

Don't forget to sing first three tracks of the Alphabet Song Chant and place the cards in order from Do, Re and Mi.

PS
All the lesson plans:
for 24 months to 3 year old
3 year old to 5 year old
5+ year old
Always check here, if there any recital in the progress! You and your child will benefit a lot from the participation.
Your place to start your Diary is here